Meet a World Leader: The Woman Behind the ILO Treaty 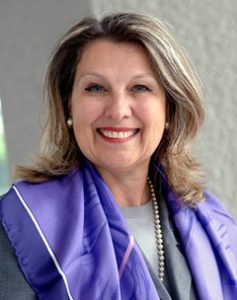 In 2012, Jane Hodges set in motion an idea that led to the creation of a groundbreaking new treaty to end violence and harassment at work—the International Labour Organization’s Convention on Violence and Harassment in the World of Work. Last month, this treaty was adopted and we are proud to announce that Jane has joined us as a global advisor. Welcome Jane!

Jane’s work at the International Labour Organization (ILO) helped transform global policy and practices for women and other marginalized groups. Over a 35-year career—the last decade as Director of the Gender Equality Bureau—Jane designed and delivered programs on fundamental rights at work, in particular sex discrimination, disability inclusion, and indigenous people’s rights.

Here, she takes us inside the intricate process of how she and her colleagues at the ILO, and the world, got the treaty done—and why even with this new convention, we need a global treaty on violence against women and girls.

Every Woman: What’s the word that defines the ILO treaty?
Jane: Unique. It is the only binding global treaty that’s getting at violence against women and girls specifically. While it only covers the world of work, so one sphere, it’s huge progress. We finally got something that includes domestic violence, and the spillover of domestic violence, into the workplace. The significance of that cannot be understated, both for women and families, but also organizations and companies.

Take us through the treaty process. How’d it start?
In 2009, ILO Members held a general discussion on gender equality, part of which centered on gender-based violence and what needed to be done to stop it. So my team and I did extensive research and by November 2012, we’d amassed enough “homework” to introduce a proposal for standards on gender-based violence in the world of work. Then we got a boost. The following year, the UN Commission on the Status of Women had the need for greater protection from violence on the table. That broader debate gave credence to my work, and formed another strong argument in the pitch for a global standard.

What moved the treaty idea forward?
More research. My team looked at the World Health Organization’s research on violence against women, UN Women’s studies, and I helped design a survey on gender and harassment. We also looked at the economic cost. I presented papers throughout 2013 and 2014, so many papers! Finally, in October 2015, the ILO Governing Body made the decision to place the treaty on the conference agenda for 2018 and 2019.

You mentioned there was strong support from Member States. Any idea why?
Many reasons, but a major one was clearly the economic cost. Nations and companies were on board morally, no one denied the problem, but understanding the financial cost was, for some, a turning point. If we let violence and harassment continue, we lose money.

The legal obligation the treaty created was another reason. If we could have an international text that is solid, clear, workable, and enforceable, that would give us accountability. The legal aspect is the third leg of the stool. Moral and economic are essential, but a treaty’s binding nature holds it up. So the secretariat prepared reports for the International Labour Conference, and the first discussion took place in 2018. The second discussion last month, in June 2019, led to the adoption of Convention 190 and its accompanying Recommendation 206!

Was there ever any doubt the convention would happen?
I always knew we’d get a convention, but the general feeling was that it would be weak. The first draft text worried some delegates because it contained language on sexual orientation and gender identity. So the secretariat held an informal consultation in March 2019, two days of dialogue, [with] no report on what was said. It let people vent, and at the same time, listen to others’ points of view. It worked. At the second conference, the language changed so that it would be interpreted in accordance with international labour standards and international human rights instruments.

Was that a good compromise?
It was a necessary one.

Did it weaken the convention?
Not really. That type of language is very common in national laws. While lists of situations that give rise to a violence can be helpful because they make terms like “vulnerable groups” very concrete, the compromise was actually very clever. Relying on the language of international human rights instruments could be a plus because no group is left out, and it dovetails labour rights and human rights in a way that no one can object to.

How will nations be held accountable?
ILO has a decades-old, tried-and-true system of supervising ratified treaties based on regular reporting to a committee of experts, and on specialised complaints procedures. If you’re not meeting the standards, you will be found out, criticized, and sanctioned. Don’t underestimate the power of international exposure. Reputation matters greatly.

The new ILO treaty joins other treaties aimed at ending violence against women. Yet a global treaty specific to violence against women and girls is still needed. Why?
The treaty landscape on violence against women has many holes. The ILO Convention, for example, is very good and specific, but it is work related. It covers your commute, but it does not cover general transportation safety—when you’re on the bus or subway coming home after night class or dinner with friends, for example. Likewise with CEDAW (Convention on the Elimination of all Forms of Discrimination Against Women), it’s specific to discrimination, not violence. It has been interpreted to include violence, but violence is not a binding part of the document.

Along with these gaps, there’s also confusing definitions and sometimes unworkable aims. I use the analogy of a woven blanket. It’s wonderful to have a blanket of protection, but there are so many holes in the weave, it barely keeps you warm. With a global convention to end violence against women and girls everywhere, in all spheres and situations, we tighten the weave, close the loopholes. The sooner we do that, the sooner we can get on with doing what human beings do—innovate, educate, connect, thrive.

Ms. Hodges, thank you for your work and this marvelous achievement. I admire and respect you and your colleagues.