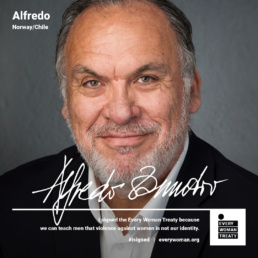 Alfredo Zamudio is the director of the Nansen Center for Peace and Dialogue in Lillehammer, Norway, working on dialogue for peace and inclusive societies. Previously, he was the director of the Internal Displacement Monitoring Center (IDMC) in Geneva, working on the monitoring and analysis of internal displacement. Alfredo has had a long career as a human rights and humanitarian aid worker in complex emergencies, with missions to the Balkans, Darfur, Timor-Leste and Colombia for institutions such as the Norwegian Red Cross, Norwegian Refugee Council and UNHCR. Alfredo received the Order of Timor-Leste by president José Ramos-Horta and on two occasions was named one of the most prominent persons with migrant background to Norway. Alfredo holds a Master’s degree in Public Administration from Harvard Kennedy School of Government, where he also was a Mason Fellow in Public Policy and Management. In 2016, he was a non-resident fellow at the Carr Center for Human Rights Policy.

“I signed the Every Woman Treaty because we can teach men that violence against women is not our identity.”