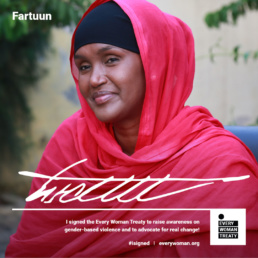 Fartuun Abdisalaan Adan worked alongside her husband, building their human rights work in Mogadishu and surrounding areas. In 1996, five years into Somalia’s now 20-year-long civil war, he was murdered by warlords unhappy with his peace-making efforts. Fartuun escaped to Canada to raise her three daughters. In 2007, when her girls were old enough to live on their own, she moved back to Mogadishu to continue her human rights work and run the organization her husband founded, the Elman Peace and Human Rights Center. To her surprise, one of her daughters, who has no memory of early life in Somalia, has joined her. Together the women, at great personal risk, provide education and job-skills training for boys as an alternative to war. In 2011, she cofounded Sister Somalia, the first sexual and gender violence crisis center in Mogadishu, which has now reached more than 6,000 Somali women and girls. Fartuun serves as a voice on the international stage raising awareness and promoting an end to violence against women and girls worldwide, with regular appearances in media, such as The New York Times, Al Jazeera, and PRI’s The World. She has been involved in Every Woman Treaty since its inception in 2013.

"I signed the Every Woman Treaty because every woman and girl has a right to a life free of violence."