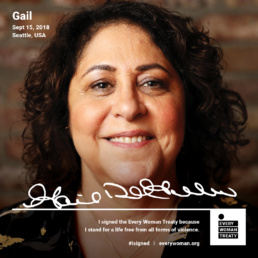 Gail has over 30 years of experience building and leading businesses in technology and consumer companies. Her career includes executive roles at Amazon, Microsoft, Global Partnerships and the WNBA’s Seattle Storm, Classmates and Hasbro/Wizards of the Coast. In 2014  she sought out an organization where she could engage both her “head and heart.” She served as Chief Capital Resource Officer at Global Partnerships. GP is an impact-led investor whose mission is to expand opportunity for people living in poverty in Latin America and Africa. Gail has served on numerous nonprofit boards and committees including FareStart, Treehouse,  OrganizedPlay,  Washington Technology Industry Association (WTIA) and chaired Executive Women in Technology. Gail holds a BA from Arizona State University.

"I signed the Every Woman Treaty because every woman and girl has a right to a life free of violence."