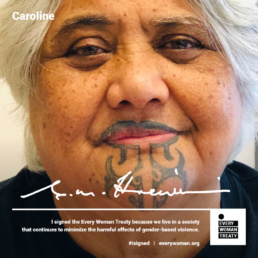 Caroline Herewini, New Zealand, is a leading voice for indigenous rights in New Zealand and a social worker whose work is driven by a deep belief in the human right of all people to lead violence-free lives. She is the executive director of Te Whare Tiaki Wahine Refuge, a domestic violence shelter for Māori, where she has spent the last 20 years working in violence prevention, services, and policy advocacy. She is the driving force behind Te Whare Tiaki Wahine Refuge Charitable Trust, an indigenous service fund underpinned by Te Tiriti o Waitangi (a treaty between New Zealand’s indigenous people and its settlers). Caroline speaks nationally and internationally on the impact of domestic violence on Māori communities, indigenous rituals, and women’s empowerment. She is a founding member of the International Network to End Violence Against Women and Girls, and in 2017 she was awarded the distinction of New Zealand Order of Merit for her work on indigenous and women’s rights and violence prevention. Caroline joined our Working Group in 2014 and chaired the Expert Special Committee on Vulnerable Groups/Indigenous Women and Girls.

“I signed because whilst we live in a society (Aotearoa New Zealand) that continues to minimize, excuse, and turn a blind eye to the harmful effects of gender-based violence, we will stand in solidarity, remain both pervasive and persistent, in action for every woman, everywhere.”