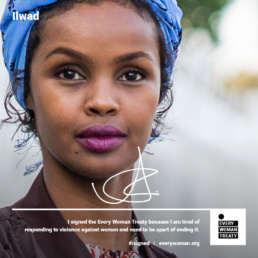 Ilwad Elman, Somalia, is the program director at Elman Peace and Human Rights Centre, where she oversees the organization’s human rights, gender justice, countering violent extremism, and peace building efforts. Ilwad returned to her home country in 2010 from Canada, where her mother had fled to during the civil war. She has been in Somalia ever since, cofounding the first rape crisis center for survivors of sexual and gender-based violence along with her mother, Fartuun Adan; designing interventions aimed at creating an inclusive space for women in peace building; and developing programs for the disarmament and rehabilitation of child soldiers. She is the youngest advisor to the United Nations’ Secretary General Antonio Guterres’ Peacebuilding Fund, an advocate for the Kofi Annan Foundation and former mentee of the late Kofi Annan, and expert advisor to the UN Youth, Peace and Security agenda and a global board member for UNICEF on the Generation Unlimited initiative. Ilwad received the Gleitsman International Activist Award from Harvard in 2015, the 2016 Right the Wrongs Award from Oxfam America, and the 2017 BET Global Good Star Award among other notable awards and recognitions.

I signed the Every Woman Treaty because I am tired of responding to violence against women and need to be part of ending it.