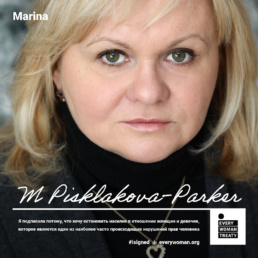 Marina Pisklakova-Parker, PhD, Russia, is a women’s rights activist and the founder and chair of the board of ANNA (National Center for the Prevention of Violence), a NGO unifying 150 organizations working to combat violence against women in Russia and the former Soviet Union. When Marina started ANNA in 1993, it was the first domestic violence hotline in Russia. Since then, she’s been involved in developing violence prevention training programs for law enforcement, judges, and prosecutors, and has worked with legislators at the national and local levels on policy changes. Her efforts led to Russian officials to start tracking domestic abuse. Currently, Marina and the ANNA network is focused on developing an effective system of response to domestic violence in Russia. She is the author of Between Scream and Silence (2000) and State of Fatherhood in Russia (2016) and serves on the Advisory Board of the Women’s Rights Division of Human Rights Watch and the Global Council for Vital Voices Global Partnership. In 1997, Marina was named one of eight most significant human rights defenders by Human Rights Watch and in 2004, was featured in the book Speak Truth to Power by Kerry Kennedy. In 2011, Pisklakova-Parker was designated as one of 150 Women Who Shake the World by Newsweek. Her story if featured in the play SEVEN. She joined our Working Group in 2014 and served on the Expert Special Committee on Types of Violence.

I signed the Every Woman Treaty because I want to stop the violence against women and girls that continues to be one of most frequent human rights violation.