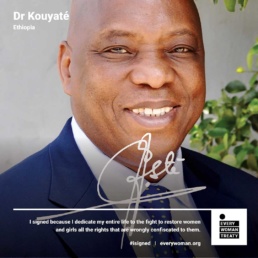 Dr. Morissanda Kouyaté is a leading advocate for ending violence against women and girls in Africa. He initiated efforts to address violence against women with the African Union Commission, leading to the Maputo Protocol, Africa’s regional instrument on ending violence against women. He carried out exceptional efforts in the fight against harmful traditional practices, particularly for the elimination of the Female Genital Mutilations: Initiative for the International Day on Zero Tolerance to FGM, and UN Resolution 67/146, which bans FGM worldwide. Dr. Kouyaté holds degrees in medicine from the University of Conakry, Guinea, and Johns Hopkins University and Clark Atlanta University in the USA. He was director of health in several prefectures of Guinea before becoming director of the health of the Conakry, Republic of Guinea. Dr. Kouyaté occupied high positions in the Ministry of Health, Republic of Guinea, serving as National Director of Hospitals and Director of the Division of the Reproductive. He was also president of the Red Cross of Conakry 3. Dr. Kouyaté was a founding member of the Inter-African Committee in 1984. He’s published extensively on the health system in Africa, and women’s and children rights. He is a consultant for several institutions and governments around the world, and was decorated by the University of Loma Linda (USA), the Ministry for the Health of Egypt, Inter-African Committee, the World Bank, and Vital Voices for his work on health promotion, and in the fight for the protection and the promotion of women’s and children rights. Dr. Kouyaté joined Every Woman Treaty in 2015 as a Working Group member and served on the Core Platform Committee.


“I signed the Every Woman Treaty because I dedicate my entire life to the fight to restore women and girls all the rights that are wrongly confiscated to them. Violence against women is unacceptable, not only in words but also and especially in the facts.”