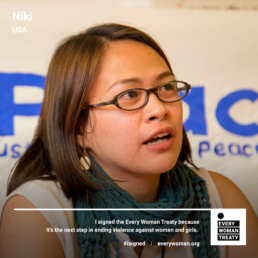 Nicolette Gamara is a development and human rights worker from the Philippines. She worked with several grassroots and national human rights organizations focusing on labor, housing and women, and human rights services for defenders and activists in distressed situations. She has done extensive research on forced evictions and its effects on urban poor women and delivered this report and intervention to the 64th session of CEDAW.

Her work was ignited and inspired by her parents who are survivors of human rights violations themselves–her mother was persecuted and her father imprisoned for their decades of work for women and labor, housing, children’s and workers’ rights. Ms. Gamara has also led organizations and national campaigns to free political prisoners, and against the persecution of human rights defenders.

Before joining Every Woman, she worked with families of victims of ‘drug war’-related extrajudicial killings to document cases, seek justice, and mobilize victim support. She helped bring the victims’ voices to the world stage such as the International Criminal Court and the UN Human Rights Council. Her previous work with urban poor women and widows and mothers of victims of the killings inspired her to take on more work to help build a safer world for women and girls.

Ms. Gamara holds a bachelor’s degree in Development Studies from the University of the Philippines.