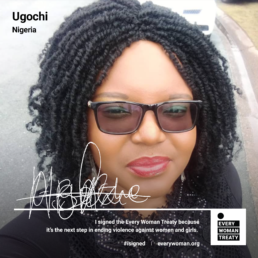 Ugochi Cynthia Abazie is a lawyer and gender specialist who holds a Bachelor’s degree in Law with a Second class Upper Division from the University of Nigeria. She was called to the Nigerian Bar in 2008 and also holds a Master’s degree in Governance and Public Policy graduating with a Distinction from the University of Queensland, Australia. She was a recipient of the Australia Awards Scholarship in 2017 for her Master’s program in Queensland, Australia.

Ugochi has extensive experience working in international development. She previously worked as a Project Manager for British Council Nigeria and World Vision Australia coordinating projects focused on the reduction of gender-based violence within communities and refugee populations, eliminating barriers preventing girl child education, and improving women’s participation in peacebuilding. She is currently the Manager, Coalition and Diplomacy for Every Woman Treaty, a global coalition working to advance a treaty to end all forms of violence against women.