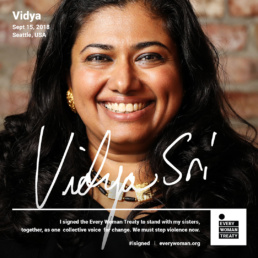 Vidya is a women’s rights activist, scholar, and leading expert on forced marriage. As the founder of Gangashakti, an organization that raises awareness and conducts research and training on forced marriage, she conducted groundbreaking research that brought the reality of forced marriage in the United States to the surface, giving women access to resources for the first time. She was a Human Rights Policy Fellow at the Carr Center, Harvard Kennedy School (2013–2016), where she led the Initiative on Violence Against Women, which examined the legal and implementation gaps in the global framework on violence against women, the groundwork for the Every Woman Treaty. Prior to women’s rights work, Vidya was a vice president in the banking industry, where she led teams of 150 people, and managed assets exceeding $1 billion.

“I signed to stand with my sisters, together, as one collective voice for change. We must stop violence now.”