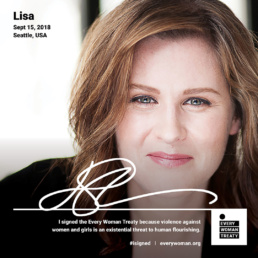 Lisa is a women’s rights activist and scholar who has worked in women’s rights since 1991. Her first job out of college was in domestic violence shelters in her hometown of Portland, Oregon. She has conducted field research on gender in India, Russia, Somalia, Iraq, Guatemala, Kenya, and Congo. She is known for initiating campaigns in the international women’s movement, including founding Run for Congo Women and cofounding the first sexual violence crisis center in Mogadishu, Somalia. She is the author of the award-winning A Thousand Sisters (Seal Press, 2010) and Mama Koko and the Hundred Gunmen (Public Affairs, 2015). Lisa was a Fellow of the Carr Center for Human Rights (2013–2014), and a Gleitsman Fellow with the Center for Public Leadership (2012–2013) at the Harvard Kennedy School. She holds an honorary Doctorate in Humane Letters from Georgetown University (2013).