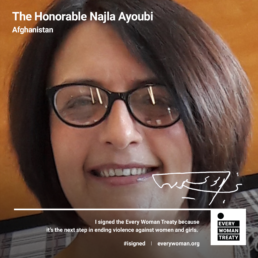 Najla Ayoubi, Chief of Coalition & Global Programs at Every Woman Treaty, is a lawyer and former judge and has extensive experience in judiciary, elections, human rights and women’s empowerment. She is a civil society and women / human rights activist. She served as a Legal Advisor for the State Ministry of Parliamentary Affairs of Afghanistan, Commissioner at the Independent Election Commission of Afghanistan and Commissioner of Joint Electoral Management Body.

Ms. Ayoubi has two MA degrees: one on Law and Politics from State University of Tajikistan and another on Post War Recovery and Development Studies from York University of United Kingdom. She is former Deputy Country Representative of The Asia Foundation, Afghanistan Office.

Judge Ayoubi has also been appointed as the 2015 Women Peacemaker at the Kroc Institute for Peace and Justice at the University of San Diego United State and spring 2017 Visiting Fellow at the University of Chicago Institute of Politics. She is a Founding & Global Executive Board Member of Women’s Regional Network (WRN) and served as a Consultant and member of South Bay Professional Association, Los Angeles California.